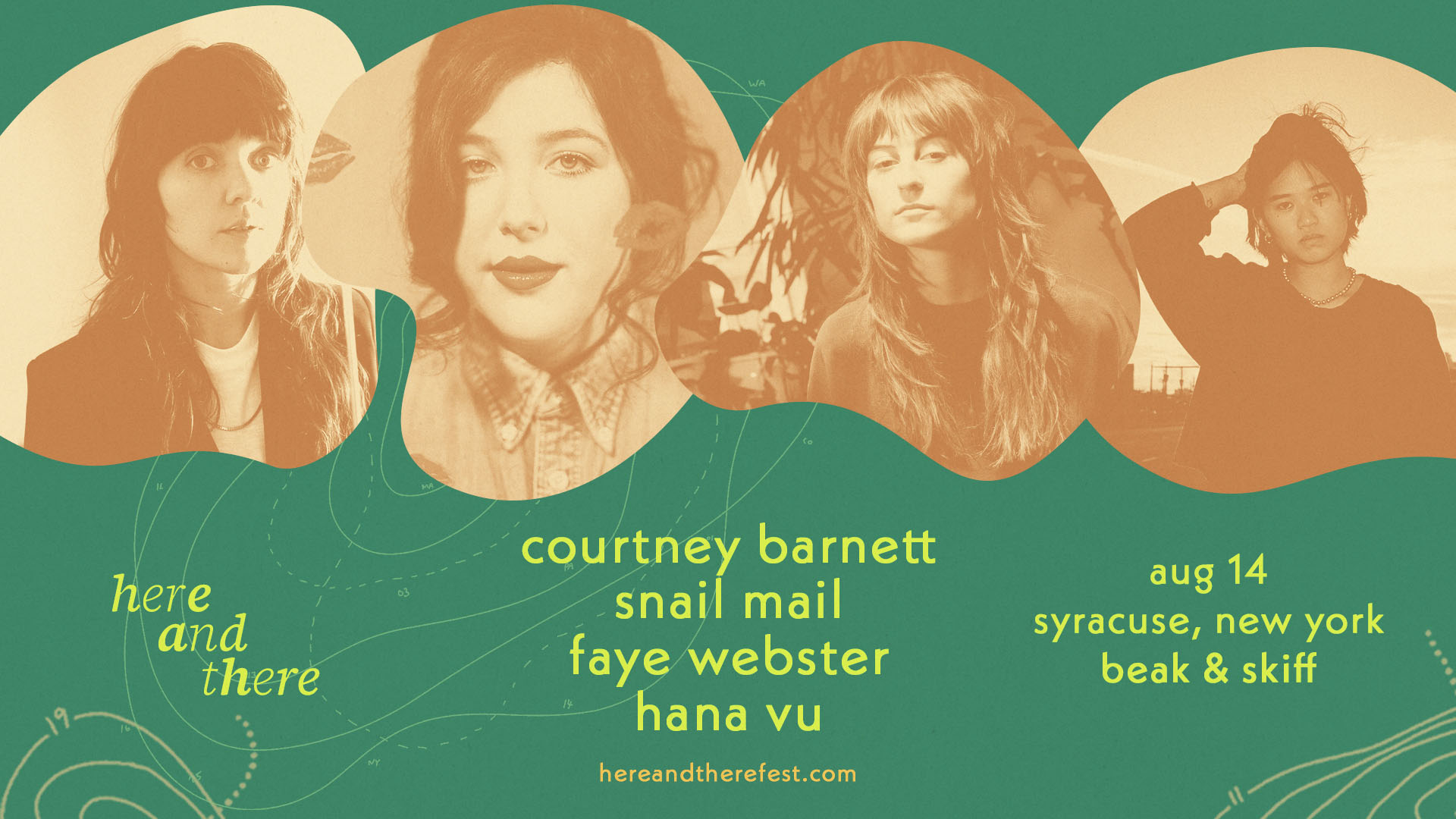 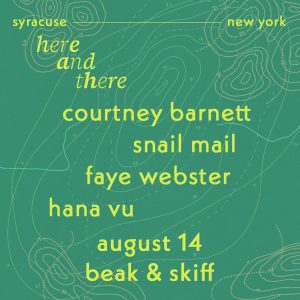 Tickets will go on Pre-Sale Thursday, 12/16, at 10AM with the password KINGS

Courtney Barnett has announced ‘Here And There’, a boutique touring festival with a rotating line-up featuring many of the most exciting songwriters in music today. This August and September, Barnett will take the one-day, one-stage festival to 15 locations around North America, each city with an extraordinary and unique line-up.

Barnett says: “When I was a kid I would make mix-tapes and dream up my own festivals, I’d even design the t-shirts and pair up musicians for iconic collaborations. I’d listen to the mix-tape and pretend it was the live recording of a concert, all my favorite artists on stage together. 10 years ago I wrote this lyric: “I got lost somewhere between here and there, I’m not sure what the town was called”. Whether that was meant to be interpreted as a geographical, emotional or philosophical journey, I thought it was the perfect title for my roaming festival.

This concept was something that remained floating in the back of my mind when I started playing music. Here And There feels like a natural culmination of energy after years of touring, and ten years of working on my label Milk! Records. It’s something I’ve been forever daydreaming about, and part of an always evolving project to share spaces and build new platforms for art and artists that I believe in.

It’s always been important to me to share the stage with people that I admire and artists that inspire me, which is why I’m so excited and grateful to announce this amazing lineup.”

When Courtney Barnett first started playing shows she drove vast distances through the Australian bushland and desert, passing occasionally through small towns and stopping at gas-stations and fast-food outlets. Eventually she’d arrive at one of Australia’s sprawling cities, unpack the car, and sing. She wrote a lot of songs about those experiences, some which appear on her early EPs and debut album. Songs like Dead Fox, Scotty Says and Out Of the Woodwork.

“I got lost somewhere between Here And There,
I’m not sure what the town was called”
Scotty Says – Courtney Barnett (2012)

After the success of her early EPs in Australia, Barnett shifted focus to playing shows in North America and Europe. Each place was new to her, without an identity formed by personal experience. She was here, then a few days later she’d be there. Destinations in those days were just names on a map. But over the past decade these nameless and faceless places revealed themselves to be the beloved homes of communities, venues, theaters and amphitheaters with thriving musical cultures and incredible audiences.

‘Here And There’ is a concept partially born of Barnett’s love of curation. Barnett has owned  a label (Milk! Records) for a decade now – releasing the music of artists from her home town of Melbourne, Australia as well a few brilliant US-based friends she’s made along the way (Sleater Kinney, Chastity Belt, Hand Habits amongst others), leveraging her deep connection with her audience to champion the music of others that she admires.

Here And There is also a fresh take on touring, inspired by a couple of life-changing events where Courtney was invited to host and curate. The first, a festival named Sonic City in Belgium back in 2019, where Barnett was asked to curate a line-up over two days.

“Curating Sonic City was such a joy. I watched some incredible music that day. Sasami, Hachiku, Joan As Policewoman, Beverly Glenn-Copeland and so much more. I was completely mesmerized, I remember looking around the room and wondering how it could have possibly all come together so perfectly. I’m so thankful to the Sonic City crew for giving me that opportunity.”

The second, a special event on Valentines Day 2020 where Barnett hosted an event for the Newport Folk Foundation. That Valentine’s Day special saw Courtney act as musical director, curator and performer along with some of today’s leading folk and indie artists.

“That Valentines Day show happened in the middle of a musical epiphany for me. It pushed me just outside my technical comfort zone and left me feeling so inspired. I especially adored the collaboration of that show, it felt like one big house band swapping songs and stories. It was such an honour to share the stage with those musicians and artists that I admire.

I was on such a high afterwards, dreaming of taking that show on the road, and then Covid halted all plans for two years.  I bought a record player during isolation and spent endless hours listening to music, I think I really fell in love with music again.”

Courtney is thrilled to have The Ally Coalition (TAC) at Here and There. TAC will be partnering with Here And There to provide site-specific programs throughout the tour. Founded in 2013 by Jack Antonoff (Bleachers) and fashion designer Rachel Antonoff, TAC is committed to bettering the lives of LGBTQ youth through tours, campaigns and partnerships, providing support to organizations serving LGBTQ Youth. TAC partners with artists and uses their platforms to raise awareness of the systemic inequalities facing the LGBTQ population and activate prominent members of the creative community and their fan bases to engage with these issues in meaningful and impactful ways. This year, TAC is touring with a range of incredible artists, including Courtney Barnett, Bleachers, Big Thief, Faye Webster, Beach Bunny and Caroline Rose.