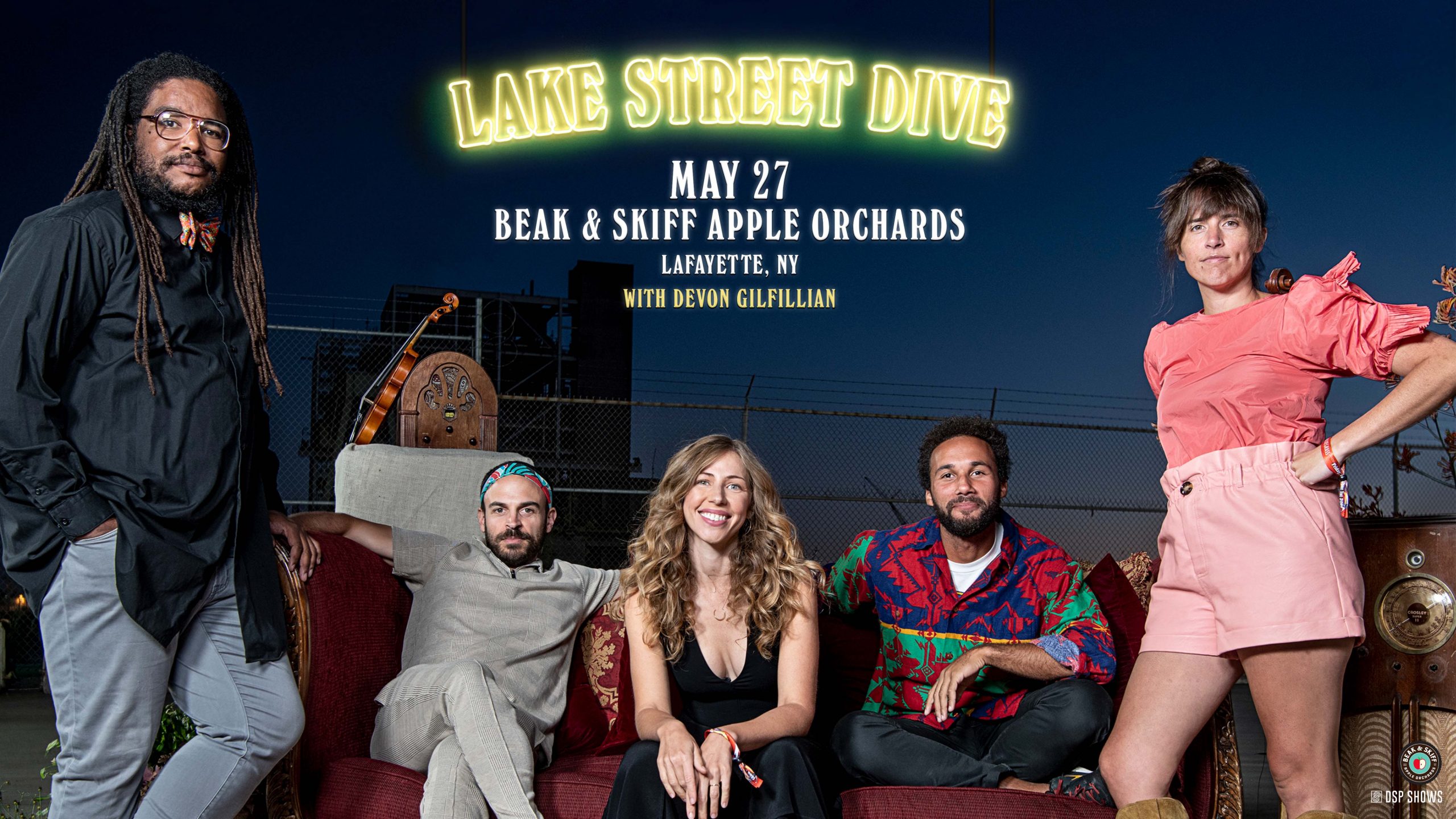 Growing up in Philadelphia on a steady diet of R&B, hip-hop, rock, blues, and soul, Gilfillian gravitated to records that ignited his mind while making his body move. Following his electrifying 2016 debut EP with upbeat singles like “High” and “Troublemaker” in 2018, Gilfillian signed to Capitol Records and hit the road––performing with the likes of Anderson East, Keith Urban, Gladys Knight, Kaleo, The Fray, Mavis Staples, and more. In 2020, Gilfillian released his debut album, “Black Hole Rainbow,” which was nominated for a Grammy – “Best Engineered Album.” After civil unrest in June 2020 following the murder of George Floyd, he re-recorded Marvin Gaye’s iconic album, “What’s Going On,” releasing it in fall of 2020 around the election. He performed “Mercy Mercy Me” for Colbert “Stay At Home.” In December 2020, Gilfillian performed his top 5 AAA hit, “The Good Life,” on Jimmy Kimmel Live. He’s currently writing for LP#2.

As a band, Lake Street Dive epitomizes democracy in action: the group, expanded into a quintet since touring keyboardist Akie Bermiss officially joined in 2017, share writing and arrangement duties. Their personalities, skills, and wide-ranging taste in pop, rock, R&B, and jazz have long blended together to make an impressively cohesive sound, both sophisticated and playful, combining retro influences with contemporary attitude. On its most recent Nonesuch album, 2018’s Free Yourself Up, the band even produced the record itself.

But, after being on the road for nearly eighteen months since that album, the band members decided they could use some outside help. They had been writing, swapping demos, and rehearsing before and after soundchecks or in backstage green rooms and had amassed a wealth of new material, full songs, and sketches. With more than three dozen new songs and the desire to make a concise, vinyl-length album, they turned to Mike Elizondo, the producer-songwriter-multi- instrumentalist whom Lake Street Dive fans might remember as music director of Chris Thile’s public radio series, Live From Here. The Grammy Award-winning Elizondo is perhaps best known as a songwriting collaborator of Dr. Dre, Eminem, and 50 Cent, but he has also served as a record producer for Fiona Apple, Mary J. Blige, Carrie Underwood, and 21 Pilots, among many others. He is as conversant in jazz as in rock, country, bluegrass, and hip hop—exactly the sort of genre-juggling guy who would appreciate Lake Street Dive’s own versatility.

Obviously is titled after the first word in the lyrics of opening track “Hypotheticals.” And it is obvious from the start that the band has homed in on Elizondo’s hip-hop record- making expertise, because, on this material, the grooves run especially deep. A sense of rhythmic fun drives just about every track, from up-tempo numbers like “Hush Money” to a bittersweet slow dance like “Anymore.” The quintet fashions disarmingly cheerful arrangements guaranteed to keep the party going even as the subject matter takes a more serious turn on lead-off single, “Making Do,” about a younger generation facing a life of diminished expectations, and “Being a Woman,” a finger-snapping, bird-flipping treatise on gender inequality. “Nobody’s Stopping You Now” is a letter of encouragement from lead vocalist Rachael Price to her teenaged self, co-written with bassist Bridget Kearney.

Though they still excel at songs like “Lackluster Lover,” poking sly fun at a hapless Lothario, Lake Street Dive has also figured out how to write tunes that reflect this particularly turbulent chapter in our shared history. As Price puts it, “You’re trying to express your anxieties, your feelings, your sadness, your happiness, all of these things—your authentic state of being in a song. But you’re also trying to create something people will listen to over and over again. That’s the unique fun thing about music, putting these messages into three and a half minute snippets, dropping whatever truth we can and hoping it’s the type of thing that people want to ruminate on.”

With the permanent addition of Bermiss to the line-up, Lake Street Dive gained another singer and songwriter, as well as a keyboardist. Vocal harmonies have been a strong suit since the band’s earliest days in Boston, when the original foursome became a YouTube sensation for its impromptu sidewalk singing. Here, with Elizondo’s encouragement, the group vocals are among their most inventive. On “Same Old News,” Price and Bermiss do a lighthearted and sexy Roberta Flack/Donny Hathaway-style duet. Album closer “Sarah” is performed a cappella, and it is as lush and emotive as an orchestrated piece.

“We had so much fun in the studio making Free Yourself Up,” recounts Kearney. “But we’ve been a band for so long that we didn’t want to just become a feedback loop of our own ideas. It felt like a really good time to bring another person like Mike [Elizondo], and he really opened us up. He encouraged us to make bolder arrangement choices, take those chances and try those things. The record really is a success in what we set out to do: continue to challenge ourselves, continue to grow, and do things we’ve never done before.”

“Throughout our recording projects, our frame of reference has come from classic rock and ’70s AM gold,” explains McDuck. “But in terms of modern production aesthetics, no one is getting it right more than hip hop. There are a lot of great rock and roll records too, but there are aesthetic choices that we, as a rock band, always struggled with when it came time to mix. So, it was great to work with someone as musically omnivorous as Mike [Elizondo], who’s had all that success and fluency in the hip hop world but can also hang when it came time to talk about double bass.”

Prior to joining Elizondo at his suburban Nashville studio, Lake Street Dive had been on what would now be an unthinkably jam-packed schedule: concert dates, Brandi Carlile’s “Girls Just Wanna Weekend” festival on the Caribbean coast of Mexico, and the annual Cayamo Cruise back east, a floating music festival with Jeff Tweedy, Mavis Staples, the Watkins Family Hour, and more. They managed to complete the recording—and even an album-cover photo shoot—before the pandemic lockdown. The studio, filled with an abundance of guitars, amps, keyboards, and synthesizers all prepped for their use, was an ideal, semi- secluded location for the band to build these tracks from the ground up.

“Playing it live all together as a start is never a bad idea,” says drummer Mike Calabrese. “Even if we didn’t keep anything but the high hat, everyone’s in there getting a feel for the arrangement. But there were other songs that were constructed piece by piece. ‘Sarah’ was the first song we recorded because we had all the voices we needed. ‘Feels Like the Last Time,’ which starts with Akie beat boxing—he beat boxed to his own demo of the song and Mike [Elizondo] was like, ‘That’s a good tempo, let’s just use that.’ We cut that up, flew it around, and pieced the song out and added layers to it bit by bit.”

Bermiss had already integrated himself into Lake Street Dive as a live performer, touring with them for the last five years, but he has now revealed himself to be a songwriter able to get right into the band’s groove. His beat-boxing skills were an inadvertent bonus. Kearney notes, “This was the first time we got to collaborate with Akie as a writer. He really brought a lot of stuff to the table. It’s pretty remarkable that you can add somebody to a band after fourteen years and have this completely new writer who fits into the grand scheme.”

Bermiss uses the word “organic” to describe how he came to work with Lake Street Dive, starting with an invitation to go on tour with them back in 2015, after the band had caught him performing a gig of his own. That led to his joining them on the Free Yourself Up sessions, and, finally, to a night in Chicago where, he recalls, “There was a formal ‘engagement’ situation. They took me to dinner and told me it was a band thing they like to do, and while I was distracted, they each put plastic engagement rings on my plate and asked if I would take their musical hands in band marriage.”

Choosing an album title was organic as well. Price says, “Naming our albums has always been a painstaking process. Obviously is the first word in the song ‘Hypotheticals’—an undeniable dance track, a great way to say, ‘We are back!’ We went through a couple of title iterations, then one day we were like ‘Obviously—let’s call the record Obviously.’ It was—in a word—obviously the right one.”