Modest Mouse with The Cribs 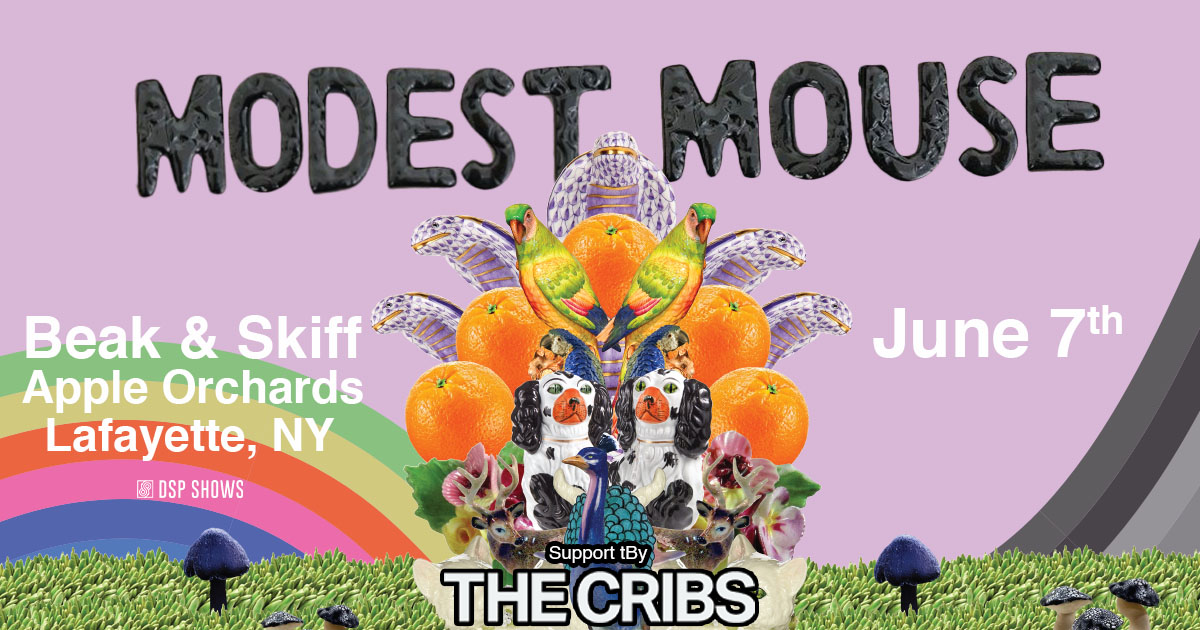 Over the past quarter century, Modest Mouse frontman Isaac Brock has served as indie rock’s resident backwoods philosopher, pondering his infinitesimal place in the world at large and seeking balance in a universe governed by polar opposites. On Modest Mouse’s earliest records, he was surveying the changes in the world’s physical landscape from the windows of the tour van, lamenting the displacement of natural beauty with big-box blights. The Golden Casket, the band’s seventh-studio album, is exploring the degradation of America’s psychic landscape through the glass of the smartphone screen. Throughout the record, you’ll pick up on all sorts of references to cellular devices, hashtags, computers, texting, and online dating culture. But this is no typical Luddite’s manifesto decrying iPhone addiction, disinformation overload, or how social media is destroying political discourse. The album is, however, very interested in the invisible technology that’s allowed all of that to happen: the cellular signals, radio frequencies, and WiFi waves that are likely beaming through your body as you read this. “Everything is giving off a frequency,” Isaac observes. “Everything is vibrating whether you know it or not. We’re swimming in some crazy shit right now—it isn’t visible, but it’s real. I think everyone’s minds are getting a little scrambled right now. And I feel it every fucking day.”

That sensation finds its most vivid, visceral manifestation on The Golden Casket’s stunning centerpiece track, “Transmitting Receiving,” where Isaac rifles through a never-ending list of consumer products, animals, and geographic phenomena like an auctioneer being broadcast through a detuned radio, before a competing vocal track cuts through with a beaming chorus line—”nothing in this world’s going to petrify me”—that finds the serenity in cacophony. Many of these songs can likewise be seen as attempts to coax peace from paranoia. You can hear it in the moment the apocalyptic blues of “Wooden Soldiers” dissolves into a blissfully existential coda mantra (”just being here now is enough for me”) that was inspired by the ceremonial burning of hallucogenic African tree bark, or in the off-kilter yet heart-swelling lullaby “Lace Your Shoes,” a.k.a. Isaac’s inaugural entry into the dad-core canon. “When we started putting this record together, I didn’t know how to really sing about anything except my kids,” he admits. “And so I was like, ‘I should just write a fucking song about the thing that is most important to me.’ It’s a weird thing to do, because cheap sentimentality isn’t really something I’m overly comfortable with, you know?” However, in his hands, “Lace Your Shoes” is no mere lovey-dovey ode to his little ones, but a protective embrace from the cruel world they’ll inevitably inherit.

Even at its most urgent and aggressive, The Golden Casket is always looking for the light, as Isaac couches the spiteful sentiments for the playful “Never Fuck a Spider on the Fly” while steering the seething post-punk propulsion of “Japanese Tree” into a blissfully escapist chorus. “That song was written over the course of a long time,” Isaac says, “so whoever I’m lashing out at in that song has been multiple different organizations, people, and situations. That’s the way a lot of the songs are: one way, it’s like this; and then you change the perspective, it’s still the same song, but with a different winner.” (Sometimes, however, a song about your friend freaking out on acid is really just a song about your friend freaking out on acid, as the antsy album opener “Fuck Your Acid Trip” attests.)

Whether Isaac is singing about electromagnetic waves, taking his kids for a walk, or tripping balls in the forest, The Golden Casket is ultimately a plea for harmony—between nature and technology, between progress and self-preservation, between hope and healthy skepticism—in a world that has seemingly lost all sense of it. But as much as it laments our modern way of living, it keeps the tinfoil stowed away in the kitchen cabinet to highlight the silver linings of our situation. On the album’s conjoined anthems—the driving single “We Are Between” and its divine sequel ”We’re Lucky”—Isaac reaffirms his humble standing on this here 3rd planet, floating somewhere between the seas and the stars, always trying to outrun his anxieties, but eternally grateful for the gift of existence itself. “We’re very lucky to get to be here, on any trip,” he says. “Whatever this is and whatever we all are, it’s kind of beautiful that we get to do it.”