This story was originally posted on nymusic.com

Despite a 90% chance of rain predicted throughout the night, the skies seemed to magically part over Beak & Skiff Apple Orchards for the sold-out Lord Huron show. An incredible sunset over the rolling hills of Upstate NY with a cool-mist lifting in the valleys was a perfect backdrop for the incredible set. 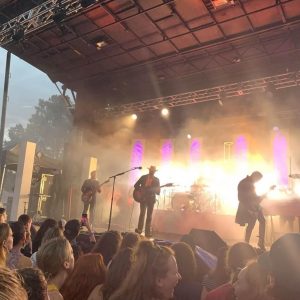 Photo: Sarah Eiley Cowherd
Ben Schneider led his bandmates, most of whom he had grown up within Michigan, unto stage with thunderous applause and cheering from the audience. Dressed as a modern cowboy, Schneider dug right into a career encompassing set of songs. The set moved with ease from mellow sing-alongs to rowdy foot-stomping moments. Most of the audience had moved forward in the entirely General Admission outdoor venue and were very attentive, not shy, about singing along. Some chose to bring blankets and chairs enjoying the show from the slowly sloping hill, lined with festive food trucks and drink options.

Much of Schneider’s writing is about his love of nature and the importance of that in his life. Beak & Skiff was the perfect venue for this, with surrounding apple orchards, beautiful views, and amazing amenities. The shows at this venue are getting larger every year, as they have moved from the central campus to an adjacent field. The effect of this allows for more space, and the sound was mixed perfectly. Schneider recognized this with the only break in the music, halfway through the set to say: “Thanks to all that stuck around and I’m so glad the storms passed through. This is so worth it what an incredible place you have here.” 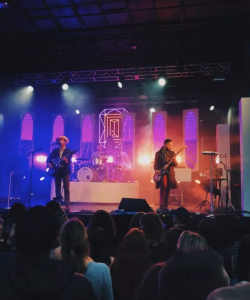 Photo: Caitlin Phofl
After a high energy set, Lord Huron closed with two of their biggest hits, “End of The Earth” from 2012’s album Lonesome Dreams and “The Night We Met” from 2015’s Strange Trails. After another successful release, Vide Noir, in 2018 it is clear that this band is more than on their way. The sold-out crowd, at one of Upstate NY’s premier outdoor venues, would surely agree. All in attendance were lucky the skies cleared. As the sun sank the smiles and energy of those lucky enough to get a ticket and the echo of the songs across the hills and valleys kept Beak & Skiff bright until the last note faded.

Setlist: Love Like Ghosts > Meet Me In The Woods, Ancient Names pt. 1, Dead Man’s Hand, Back from The Edge, Time To Run, Hurricane, The World Ender, The Ghost On The Shore, She Lit A Fire, Wait By The River, The Birds Are Singing At Night, Lost In Time & Space, Never Ever, Secret of Life, Emerald Star, Yawning Grave, Way Out There, When The Night Is Over, La Belle Fleur Sauvage, Fool For Love, Ancient Names pt. 2.